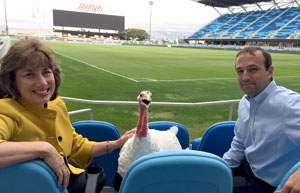 For more than 30 years, low-income families in Santa Clara County have queued up at Cityteam’s doors in an industrial neighborhood north of downtown San Jose each Thanksgiving, to receive food boxes for the holiday.

The event consistently represented a logistical challenge. Limited onsite parking meant families had to be shuttled back and forth from the facility, and volunteers found there was only enough room in Cityteam’s freezers to serve 1,500 families.

Cityteam Development Officer Dee Dee Kiesow was at a San Jose Earthquakes game one day, thinking about logistics when she had a big idea: Why not hold the event there? Avaya Stadium had plenty of parking, space for more volunteers, room for families to queue up and commercial freezers for even more food.

The Earthquakes quickly threw their support behind the idea. On Nov. 24, 2015, some 3,200 families arrived at Avaya Stadium to receive food boxes. Members of the team’s front office volunteered, as did Earthquakes midfielder Cordell Cato and the team’s mascot, Q.

The event went so well that Cityteam is partnering with the Earthquakes to hold the event at Avaya Stadium again this year on Nov. 22. Volunteers can sign up to help at cityteam.org.

See the Full Article Below: